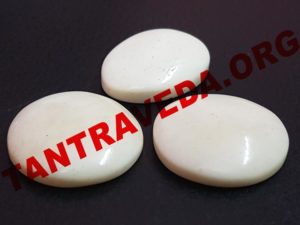 A Gaja mukta is a greenish brown oval, anatomical structure. It is said to have magical and medicinal properties. It is a form of pearl found in one in a million elephants. If studied minutely and in detail, one finds it to be a natural, antique item. Extremely rare and expensive, they are supposed to bring great fortune to the owner of such a pearl or mukta. They are considered priceless treasures and usually only gifted by tribal chieftains, accidently found deep in the jungles or in the fossils of old elephants.

Is it alive? Experiments have been done to find out whether it is actually a supernatural living thing or not? Unfortunately, it lives for 11 to 40 days after detaching from the elephant. After that, it becomes stable and starts releasing its powers to the possessor. Its powers can be used by the possessor if he starts using it within specific yogs and nakshatras only.

If the Gajmukta is put into clean water, the water turns milky. Which is wrong. Nothing of this sort happens. It is not a black magic item. Genuine gajamuktas does not perform anything like this. Even the belief of wrapping it in the leaf and its reactions is also a myth and not true at all. Chinese fake counterparts try to fool people with artificially created look alikes.

Another myth is that when tested with a stethoscope, heart beat can be heard, which is not true. Or when kept in Coconut water, bubbles are produced and the quantity of water decreases eventually. Or If Gaja mukta is put on a Paan Patta, placed on Rayii, substance used in Indian traditional food for making it spicy, for eg used in pickles, Gajmukta immediately starts vibrating.

When Gajmukta is held in a hand in a specific aasan, one can feel little vibrations in the hand and even in body sometimes.

The Gaj mukta has many medical advantages and has the ability to cure many diseases like joint pains, inability to produce child in both men and women. Research shows that other than these two, it helps in spiritual healing and relieves one from stress. Also, it is considered to bring fortune to whoever possesses it. According to Chandigarh Tribune article, Gajmukta is an Enigma in mystery, gaj mukta, gaj moti, gaj mukta, is believed to be found in rare elephants and is known for its aphrodisiac qualities. Just as snakes are sought after for ‘mani’ and musk deer for ‘musk’ (kasturi), the gaj moti is obtained from an elephant. This oval or round shaped object has been examined by various geologists, but it remains a mystery.